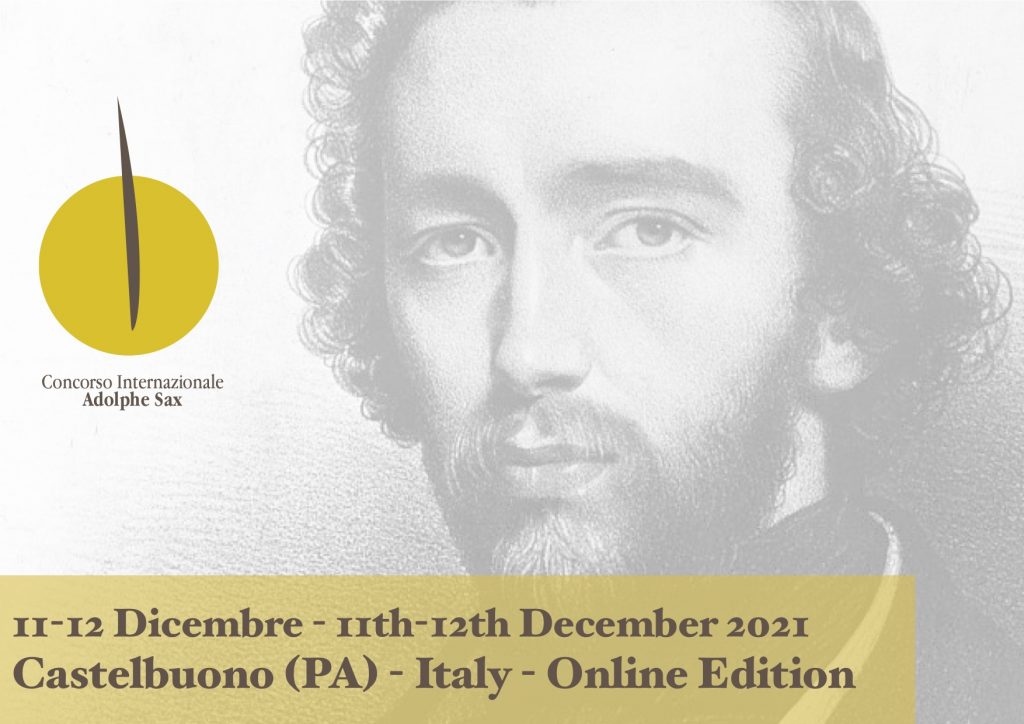 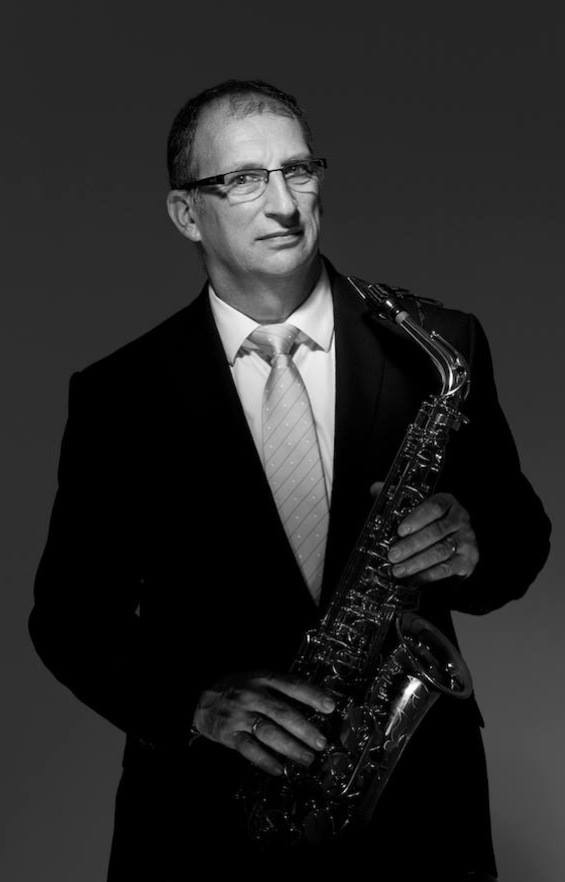 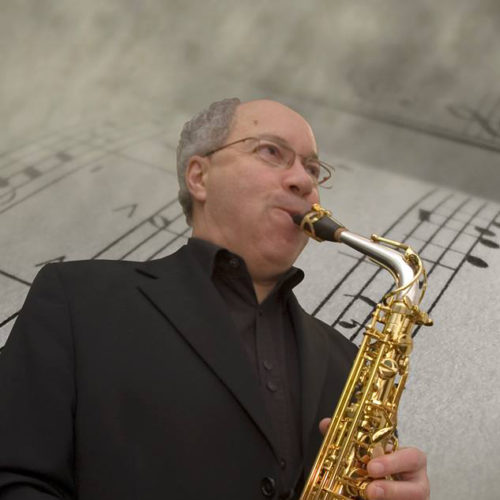 Alain Crepin, a many-sided musician, was born on  February 28th 1954 at Mettet (Belgium). At first he studied saxophone, violoncello and piano at Dinant; later on he went to study the saxophone with François Danneels at the Royal Brussels Conservatory of Music. He graduated from this prestigious conservatory with a Higher Degree for saxophone and chamber music as well as First prizes for harmony and counterpoint. Moreover, he also studied fugue and orchestration.
At present he is professor of saxophone at the Brussels ‘Conservatoire Royal de Musique’ and professor of orchestration and conducting at the Conservatory of Music of Esch-sur-Alzette (Grand Duchy of Luxemburg).
Since 1983 he is a military bandmaster with the rank of an officer and for 21 years he was musical director of the Royal Symphonic Band of the Belgian Air Force.  King Albert II promoted Alain Crepin to the rank of major on December 26th 2004 and on until August 31th 2008  he was appointed artistic director of  all the bands of the Belgian Army.
As a soloist or conductor he has recorded some 60 compact discs and performed all over the world. He accompanied the greatest saxophone players at the European Saxophone Days at Dinant in 1990 and at the World Saxophone Congresses in Minneapolis (Minnesota 2003) and Ljubljana (Slovenia 2006). As a virtuosos saxophonist he was also Vice President of the (Association Internationale pour l’Essor du Saxophone) and he is currently a board member of the “A.SAX” (Association pour le Saxophone). Since 1994, Alain Crepin is also an active member of the “AIAS” (Association Internationale Adolphe Sax / International Adolphe Sax Association) at Dinant. He was secretary of the jury of the International Saxophone Contests at Dinant in 1994, 1998 and 2002, and since 2005 he is president of this jury. Every four year he conducts the gathering of saxophonists from all over the world honouring the inventor of their instrument (in 2006 they were no less than 1402!).
As a composer, Alain Crepin wrote numerous works for symphonic band as well as a lot of solo instrumental pieces with piano accompaniment. Most of these compositions have been recorded on CD and performed by famous wind bands and orchestras in many countries.
Crepin’s compositions are published as well in Belgium (with Andel, HaFaBra Martinus, Bayard-Nizet) as in France (with Henry Lemoine – Paris and Robert Martin – Mâcon) and in The Netherlands (with De Haske Publications and Tierolff Muziekcentrale).
These numerous activities do not prevent him from adjudicating in Belgium and abroad (at the Paris ‘Conservatoire National Supérieur de Musique’, as well as in Nice, Munich, Valencia, Taiwan, Madrid, Israel, Trento … Moreover, he also gives several master-classes e.g. in Vienna, Jerusalem, Gap (France), Alicante (Spain),Szczecin(Poland), Madrid (Spain, Caracas (Venezuela) etc… 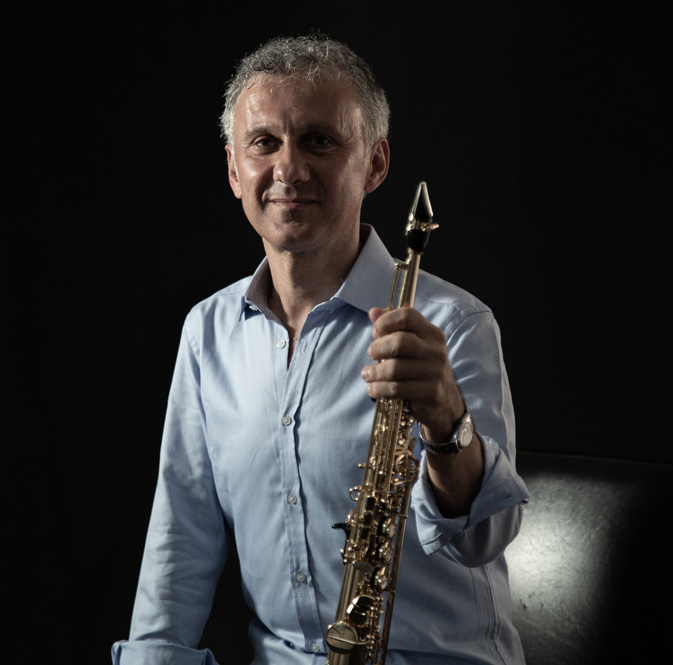 A prodigious student, Marco Gerboni graduated in Sax Performance from the Conservatory “G.Rossini” of Pesaro with the highest possible grade at the age of 16. Three years later at 19, he completed his performance degree in clarinet as well.

As a duo performer, he won First prize in 12 national and international competitions.

In 1990, he won first prize for Principal Sax at the Arena di Verona Orchestra. As a soloist at only 14 years of age, he won first prize at the  International “Premio Ancona” for Wind Instruments (Goffredo Petrassi President of the Jury), while with the Baires ’87 Group he won the 1992 “G.Tani” Prize.

As a soloist he has performed with Orchestra del Teatro Comunale of Treviso, Orchestra of Ferrara, The Regional Orchestra of Lazio and The Orchestra Philarmonia Veneta, Arts Symphony Ensemble di Barcellona.

His recordings can be found on the following labels : Emi, Rai Trade, Delos, Stradivarius, Primrose Music and Pentaphon, Warner Bros.

He was a member of Italian Saxophone Quartet and with this group performances have taken  throughout Europe  and  USA. He played also in Cina and Japan.

He has taught masterclass in Portogruaro, Fermo, Asolo, Frankfurt (Hochschule), Cordoba, Granada, Valencia, Jaèn and Madrid, Conservatory of music in Birmingham, University of  music in Iasi (Romania)  and at The University of Denver (Colorado).

He is currently full Professor of Sax at the “G. Frescobaldi” Conservatory of  Ferrara- Italy. 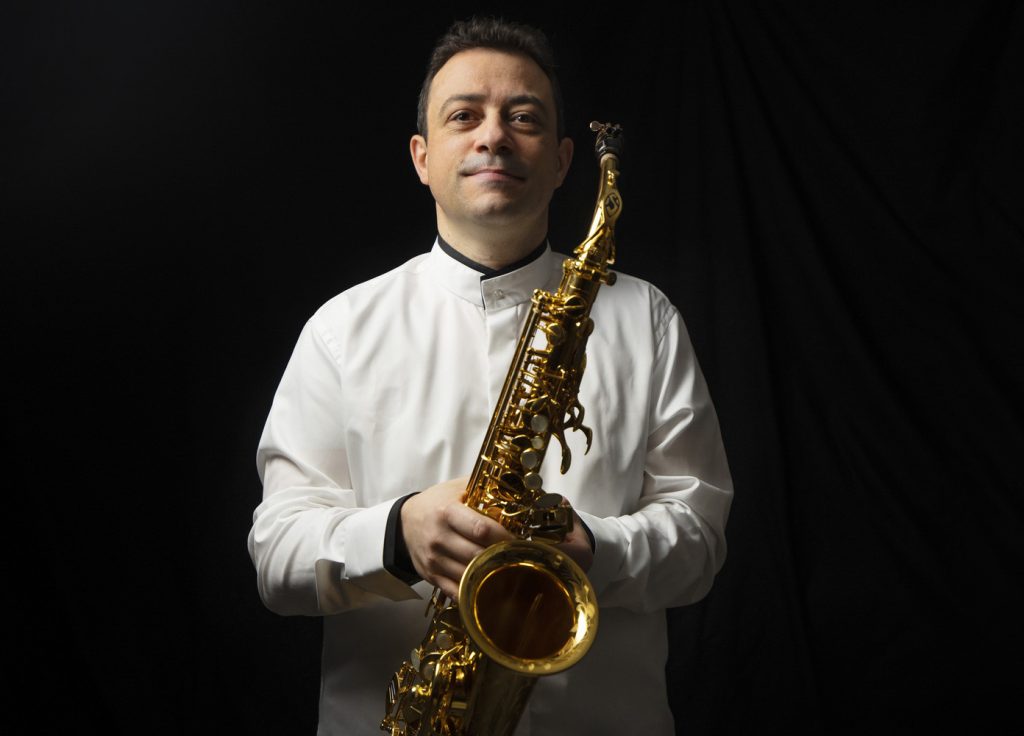 Jérôme Laran was born in 1978 and began the saxophone when he was 9 years old. He studied with Claude Delangle at the Conservatoire National Supérieur de Musique et de Danse de Paris, and graduated in 2002  with a first prize with unanimity. He then followed the two years “cycle de perfectionnement” (advanced cycle) and obtained in 2005 the aptitude certificate in saxophone teaching. He has received numerous prizes and awards including the Cziffra Foundation and the prestigious “Révélation Classique” (classical discovery) prize from ADAMI in 2004. He was also supported by the Sasakawa, Meyer foundations and the Mécénat Musical Société Générale.

Jérôme Laran received the first prize at the International Saxophone Competition in Luxembourg (2000), and he also excelled in several international competitions  such  as A.R.D in Munich (2001), Adolphe Sax in Dinant (2002).

Jérôme Laran has given numerous concerts and recitals in Europe, America and Asia in the most prestigious concert halls : Cité de la Musique, Salle Pleyel, Salle Gaveau, Auditorium du  Musay d’Orsay in Paris, Philharmonie in Berlin and Köln, Victoria Hall in Geneva, Opera City, Partenon Tama and Bunka Kaikan in Tokyo, as well as in festivals such as Pablo Casals in Prades, Festival d’Automne in Paris, Les Transclassiques, Voix Nouvelles, Musica, Ars Musica in Brussels and the Tokyo Summer Festival.

In addition, he has appeared in publications that include Vandoren Magazine and C.M.F Magazine in France, Saxophone Journal in the United States, Japan’s Pipers, Band Journal, The Sax magazines and the Australian  Clarinet and Saxophone Journal.

Jérôme Laran is artistic director of one summer music festival in the south-west of France, les Rencontres Musicales de Capvern. He is also in charge of a new collection for International Music Diffusion Edition.

Jérôme Laran teaches saxophone at the Conservatory of Aulnay-sous-Bois and frequently gives master classes in Europe and Asia. 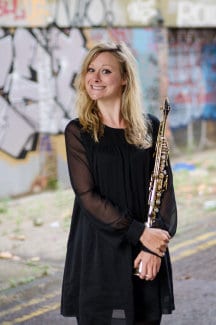 Naomi Sullivan lives and works as a freelance saxophonist in London. She has been Head of Saxophone at the Royal Birmingham Conservatoire since 2008.

After studies in Manchester (Chetham’s School of Music), London (Royal College of Music) and Evanston (Northwestern University, Chicago), she performed in the UK as part of the Countess of Muster Recital Scheme, Park Lane Group and ‘Live Music Now!’

As a chamber musician, Naomi has been part of several groups – including Paragon Saxophone Quartet, Zephirus Quartet and most recently with Flotilla, lead by Kyle Horch.

She is currently performing with Sounding Cities (www.soundingcities.com) – a collaborative project that uses audio/visual arts to explore the environment in which we live. Sounding Cities works with composers and visual artists to devise performances inspired by responses to our urban surroundings – questioning how we experience contemporary music and how music and art can mirror our fast changing cities.

In 2009, at the World Saxophone Congress in Bangkok, Naomi co-founded syzygy, with the aim to perform established contemporary works alongside promoting new music for saxophone quartet. syzygy has played at Adrian Boult Hall, Birmingham, as part of the Frontiers + Andriessen Festival, where they performed Louis Andriessen’s Facing Death, Huddersfield Contemporary Music Festival, the Purcell Room as part of the Park Lane Group Young Artists Series and ‘Proud’, Camden. In 2014, with support from Help Musician’s UK, C.A.S.S and the many kind supporters of a Kickstarter project, syzygy released a debut recording of David Maslanka‘s Songs for the Coming Day.

In September 2007 Naomi started teaching at Birmingham Conservatoire. She has given master classes at a number of institutes including the Royal College of Music, Trinity College of Music, Chetham’s School of Music, Well’s Cathedral School, the Purcell School, the 2017 Andorra SaxFest, the Royal Conservatoires of Antwerp, Brussels, Ferrara, Fermo, Lucerne and Amsterdam (Long live Erasmus). She has taught at the Purcell School, City of London School, Hindhead Summer Course, and for various saxophone days in the UK.

Practicing electro-acoustic music, he integrates new technologies into his repertoire and plays the EWI saxophone and the Sylphyo (he collaborates with the company Aodyo for the development of this instrument). He plays in duet with Nicolas Prost and has received numerous commissions for electronic instruments. Stéphane Sordet also plays Henri SELMER Paris instruments and mouthpieces.

A “crossover” saxophonist, he practices all saxophones (from bass to sopranino), and loves encounters and crossovers between the arts, mixing musical styles and artistic practices. He performs in orchestras, in chamber music (reed quartet and various formations), but also with actors (Sylvian Bruchon, Sophie d’Orgeval, DJ Taj) and plays with eclectic formations mixing improvised music, scholarly music and electronics or jazz and world music, but also with other artistic practices such as dance where he has collaborated with the choreographer Herwann Asseh.

He is regularly invited to universities, conservatories and other cultural institutions (museums, art schools, cultural centres…) to give lectures on contemporary music, computer music and computer-assisted creation techniques.

He is a member of the French Saxophonists Association, where he is in charge of the presentation of new repertoires within this association.
He is currently professor of artistic education at the Conservatoire à Rayonnement Régional de Brest.

After graduating in Clarinet in Conservatorio di Frosinone, he further proceeded in graduating with honours in Saxophone at the Casella Conservatory of L’Aquila.

He collaborated to the Hommage à Sax compact disc (with Claude Delangle), to whom Radio France has dedicated the documentary L’Immaginaire de Sax, during the 100th anniversary of the inventor’s passing, held at the Musée des l’Invalides in May 1994.

He is a saxophone teacher at the Conservatorio J.Tomadini in Udine. He holds courses and master classes in Spain, Denmark, Venezuela, United States, Slovenia, Albania. Turkey, Latvia, France ( (Parigi, Conservatoire National Superieur de Musique), Czech Republic, Poland, Estonia, and Italy.  He is regularely invited to take part as a member of the jury for musical competitions in Italy, France, Slovenia, Latvia.  His students are winners of concourses in prizes in Italy and abroad.

He was awarded the prestigious Premio Scanno XXXIV Edition for his long career.

Alex Sebastianutto obtained a degree in Saxophone Performance from the Conservatorio J. Tomadini in Udine with full marks and then obtained a master’s degree in Teaching of Instrumental Music.

He graduated with a master’s degree in Musical Studies and Wind Instruments-Saxophone from the Conservatorio G. Frescobaldi in Ferrara, where he studied with Marco Gerboni, with full marks and honors. He then received a master’s degree in Chamber Music from the Conservatorio G. Frescobaldi in Ferrara, again graduating with full marks. He then studied with internationally renowned teachers Jean Marie Londeix, Federico Mondelci, Mario Marzi, Massimo Mazzoni, Marco Gerboni, Fabrice Moretti and Claude Delangle.

He performed in prestigious festivals in Italy and abroad, including the 14thWorld Saxophone Congress in Lubljana (Slovenia), the Biennale di Venezia, the Ravenna Festival, the 17th Stage Internazionale del Saxofono in Fermo and the 39th Navy Band International Saxophone Symposium in Washington D.C. (USA).

To his credit he has several recordings for Italian National television channels (RAI and Mediaset – Canale 5), National radio (Radio 3), and record productions (Intersections in 2011, Faces in 2011, Zahir in 2013, Viaje in 2016, Solo in 2017). Thanks to his versatility he has also performed with renown artists such as Tosca, Antonella Ruggero, Matteo Setti, Luisa Cottifogli and Milva.

He is esteemed for his concert, recording and didactic activity conducted in Italy and abroad with MAC Saxophone Quartet.

He is a contemporary music populariser and the founder and artistic director of the Pontebba Saxophone Festival (2013, 2014, 2015, 2016, 2017, 2018), an important reference point in Italy for students and saxophone enthusiasts.

He is currently professor of Saxophone at the Liceo Musicale “Carducci-Dante” in Trieste.